Courting and the Tie

The luckiest breeders have a bitch that goes into season on schedule, becomes predictably flirtatious around day 7, presents herself willingly to the stud and accepts his advances without struggle. The male confidently mounts his mate, the tie ensues, he dismounts and they stand calmly side-by-side until ejaculation occurs and the tie is over. The experienced breeder will be amused at the seeming effortless description of this natural event. She will remember the times that the bitch wouldn’t cooperate, or the stud was uninterested, or they wore themselves out with unproductive thrusting. The stud dog owner remembers fielding calls every day from a distraught bitch owner, worried that her window of opportunity to conceive was waning, and that her world would come to an end if this mating didn’t take place. Conversely, when the tie finally occurs the female panics, pain and/or injury ensues, the male is so traumatized that he becomes celibate, and his owner is understandably worried about the condition of the bitch in her care. What should happen, and what sometimes does happen, are worlds apart. The mentoring of an experienced breeder is invaluable, and it is also helpful to pair an inexperienced bitch with a seasoned stud, and a first-time stud with a mature and seasoned brood bitch.

At the onset of estrus, the female will sniff the male and invite him to sniff her by turning her rear quarters. She will flag her tail to one side and tease to get the male’s attention. She may lay her head across his back, paw at him or mount him.

When a sexually mature male encounters a female in estrus, he will make a preliminary approach, sniff and lick to test the bitch’s reaction. If she is not yet interested or aggressive toward the male, he will try again later. Males will not fight with a female, they just wait until she is more receptive. When the bitch is ready for breeding, she will stand solidly and flag the male. He will mount and clasp her around her flanks, begin thrusting until the penis enters the vagina. At this time the dog is partially elevated over her back and will dance from side to side on his toes. Intense deep thrusting occurs at the time the bulb of the penis enlarges. The enlargement of the bulb within the vagina causes the penis to be locked inside the vulva and the tie is accomplished. The dog will dismount and place both feet on the ground on one side of the bitch. Then he lifts his rear leg so he can turn around and the remainder of the tie is spent with the dog and bitch standing tail to tail. The length of the tie can last for just a few minutes to over an hour. During this time ejaculation continues intermittently. Conception can occur with or without a tie, and the length of tie has no influence on conception.

During the tie the bitch may stand quietly, but she may try to get away from the male. The male can be dragged by the bitch, with the potential for trauma and damage. For safety they should be fully supervised during the entire tie. The bitch may twist, turn, cry out, or howl. These actions can frighten a young inexperienced male. It can be helpful to scoop up the two tied animals and hold them on your lap in a big comfortable chair for the duration of the tie. 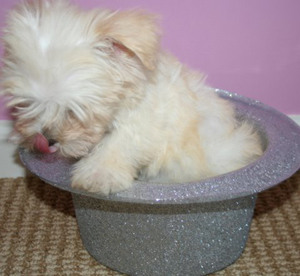 Note: One breeder scoops her tied Havanese up and places them in a 2 4-gallon Rubbermaid storage tote. It is large enough for them to stand comfortably side-by-side, but too tall for them to attempt to jump out. They appear comforted by the confinement, like swaddled babies, and relax and let nature take its course. She refers to the storage tote as the ‘breeding bucket.’

When the swelling of the male’s bulb goes down, the tie is broken. Both dogs will usually sit and lick themselves. Once in a while the skin at the tip of the prepuce will roll inward when the penis is being withdrawn back into the sheath. When this happens, the tip may not retract entirely into the sheath and will be exposed to drying and trauma. This can be very painful for him. The dog’s licking usually corrects the problem but always inspect the male’s prepuce after every mating to be sure all has returned to normal. If not, a light spray mist of water should help.

Stud dogs should gradually be introduced to having a bitch held for them, and it is well worth the effort to train a stud dog this way. It’s especially helpful in holding up a submissive bitch that continually sits as well as an aggressive one that snaps or tries to escape. You must always protect your stud dog physically and mentally if you want him to perform. Young males are more likely to mount inappropriately: i.e. head, shoulders, side etc. Experience is important to the male’s behavior and gentle guidance and encouragement is helpful.