Keeping Four Paws Ahead of Your Puppy 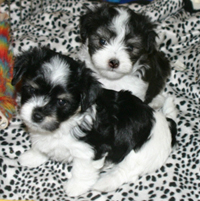 Your pup is going to pick up everything it can in its mouth and in the yard. It will eat grass and weeds. You have to clean up all of your grass cuttings. Rotting grass will kill the pup if it eats it. You must be careful and watch what goes in the pup's mouth. Antifreeze has to be stored up and away from your pup. If it licks the container it is going to die. Lawn plants and bushes are a no no. Houseplants are a no no. Swimming pools have killed a lot of Havs. They jump in and cannot get out. They tire quickly and drown. Getting their heads stuck in the openings of chain link and wooden fencing has killed Havs. or caused severe nerve damage. Large dogs reaching over fences and enclosures as well as snatching them up when they are being walked on lead have killed Havs. Birds of prey have swept down out of the sky and taken off with small Hav puppies. Know your environment and take care for unexpected situations.

If your puppy cannot jump on something easily it should not be allowed to jump off of it, if put on it. Furniture and beds are the number one cause of injury. The puppy can have the best patellas in the world but once they are injured from a force sustained landing off of a high place they may need surgery to fix them. If you are lucky they may just be weakened. Reclining chairs and exercise equipment as well as rocking chairs are all very dangerous. Be careful on all stairs and do not force them up and down them until they are ready. Havanese squirm and leap in your arms. Take care not to let your puppy lunge squirm or leap out of your arms striking its head. This happens all of the time. Hips are damaged, epilepsy can result from a blow to the head, legs are broken and lives are lost from the pup flinging itself out of your arms and striking its head or a sharp or hard object when it lands abruptly.